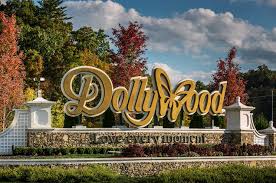 It’s no surprise that Dollywood is the top theme park in Tennessee. Families travel from across the country to enjoy the park. But, there is more to the theme park than you might think.

Dollywood wasn’t always known by that name! The theme park was originally a small tourist attraction named Rebel Railroad and had a coal-fired steam engine, a general store, a blacksmith shop and a saloon. In 1970, the attraction was relaunched as Goldrush Junction, and then renamed Silver Dollar City in 1976 when Herschend Enterprises bought it. It wasn’t until Dolly Parton expressed interest in the park that Herschend Enterprises rebranded it as Dollywood in 1986.

Did you know that Dolly Parton refuses to ride the rides at her own theme park? The country music legend has a fear of roller coasters. She admitted to having motion sickness, and even used to get sick riding the school bus when she was younger. She also joked that she has too much to lose — like her hair!

You Won’t Find Any Recycling Bins

Another interesting fact about the park is that you won’t find any recycling bins. This isn’t because the park doesn’t care about the environment. It’s quite the opposite. Sevier County is home to one of the best recycling and composting programs in the world. The Sevier Solid Waste Composting Facility is able to send 70 percent of incoming waste to composting and recycling. The facility removes all recyclable materials once the composting process begins, which means they don’t have to separate the trash.

The next time you visit, be sure to stop by the Spotlight Bakery. The apple pie is made from scratch and baked in a cast iron skillet to guarantee a nice, flaky crust. The filling is made of around 35 apples, cinnamon, butter and sugar. The pies are baked fresh every day. An individual slice weighs 3 pounds and can feed about 4 adults, so you’ll have plenty of pie to go around. You can even splurge and get the entire pie including the cast iron skillet.

There is a Church Service on Sundays

Every Sunday, the chapel in Dollywood has church services for visitors. The Robert F. Thomas Chapel is named to honor the doctor who delivered Dolly as a baby! It is a one-room country church where the wooden pews and hardwood floors echo with the sounds of families and neighbors who gather for Sunday morning worship.

The Dollywood Express Was Used in WWII

The Dollywood Express is one of the most iconic rides at the theme park, but not many people know the history behind the trains. During World War II, the steam engines played an important role in America’s war effort. In 1942, the engines were known as the “United States Army Transportation Corps S118 Class steam locomotives” and helped with the delivery of supplies. Today, the locomotive takes visitors on a 5-mile journey through the foothills of the Great Smoky Mountains.

Dolly Parton is not the CEO

The park is still owned and operated by Herschend Family Entertainment, which also owns SeaWorld and more than 20 other theme parks in the United States. Dolly Parton does sit on the board and is integral in planning the events and attractions of the park.

You Can Visit Dolly’s Childhood Home

There is a replica of Dolly’s childhood home that sits near the entrance of the park .Visitors can walk through the two-room home and get a feel for where Dolly grew up. The replica cabin was constructed by Dolly’s brother Bobby, and the interior was recreated by her mother. Most of the items on display throughout the cabin are original family treasures.

Now that you know all of these interesting facts about Dollywood, it’s time to plan your visit. My Bearfoot Cabins has the perfect place to stay while you’re here, then start planning your trip.
Pat and Don Kirchhoefer, Owners
618-559-3915
pat@mybearfootcabins.com
https://mybearfootcabins.com