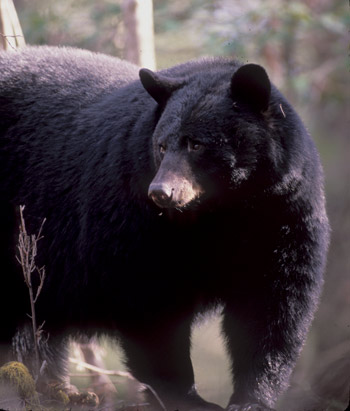 Bears in the Smokies

Great Smoky Mountains National Park is one of the largest protected areas in the eastern United States where black bears can live in wild, natural surroundings.

Bears inhabit all elevations of the park. Though populations are variable, biologists estimate that roughly 1,500 bears live in the park. This equals a population density of approximately two bears per square mile. At one time, the black bear’s range included most of North America except the extreme west coast. However loss of habitat has resulted in a significant reduction in this range.

Black bears in the Smokies are black in color, but in other parts of the country they may be brown or cinnamon. They may be six feet in length and up to three feet high at the shoulder. During the summer months, a typical adult male bear weighs approximately 250 pounds while adult females are generally smaller and weigh slightly over 100 pounds. However, bears may double their weight by the fall. Bears over 600 pounds have been documented in the park. Bears can live 12-15 years or more, however bears which have had access to human foods and garbage have a life expectancy of only half that time.

Bears, like humans, are omnivores. Plant materials such as berries and nuts make up approximately 85% of their diet. Insects and animal carrion provide valuable sources of protein for bears.

Bears have color vision and a keen sense of smell. In addition, they are good tree climbers, can swim very well, and can run 30 miles per hour. Bears are most active during early morning and late evening hours in spring and summer. Mating usually takes place in July. Both female and male bears may have more than one mate during the summer.

Bears choose a denning site with the coming of cold weather. Dens are usually hollow stumps, tree cavities, or wherever there is shelter. Bears in the Smokies are unusual in that they often den high above the ground in standing hollow trees. Bears do not truly hibernate, but enter long periods of sleep. They may leave the den for short periods if disturbed or during brief warming trends.

One to four cubs are born during the mother’s winter sleep, usually in late January or early February. Bears weigh eight ounces at birth. Females with newly born cubs usually emerge from their winter dens in late March or early April. Commonly born in pairs, the cubs will remain with the mother for about eighteen months or until she mates again.

Use the interactive map below to learn more about bears in the Smokies. The bear’s keen sense of smell leads it to insects, nuts and berries, but the animal is also enticed by the tantalizing smells of human food and garbage such as hot dogs, apple cores, chips, and watermelon rinds left on the ground in picnic areas, campgrounds, and along trails. Feeding bears or allowing them access to human food and garbage causes a number of problems:

For these reasons, park rangers issue citations for littering, feeding bears, and for improper food storage. These citations can result in fines of up to $5,000 and jail sentences lasting up to six months. Visitors are urged to view all wildlife at a safe distance and to never throw food or garbage on the ground or leave it unattended. Garbage Kills Bears! Bear management is really people management. How visitors behave while in the park has an impact on the safety of bears. If you are careless with your food or litter, YOU may be responsible for a bear’s death!

The park has done many things to make it easier for you to protect bears. Bear proof dumpsters or trash cans can be found in all campgrounds and picnic areas. Please use them to dispose of garbage.

During summer months, some of the busiest picnic areas close at 8:00 PM so these areas can be thoroughly cleaned before dark and any food scraps or trash left by careless visitors can be removed. Park rangers patrol picnic areas and campgrounds to enforce evening closures, littering and food storage regulations. They also strictly enforce regulations that prohibit approaching, harassing, disturbing or feeding bears.

An army of park volunteers patrol the park’s most popular trails, picnic areas, and campgrounds to educate visitors about protecting bears. They confiscate unattended food or coolers and clean up food scraps left behind by careless visitors. These volunteers also assist in managing people during roadside bear jams.

In the backcountry, food storage cables have been installed to make it easier for backpackers to hang their food and garbage so that bears cannot get to it. At some campsites, telephone poles were flown into remote backcountry areas because the trees around the campsites were too small to set up an effective cable system!

The park’s Resource Education staff provides information about bears at visitor centers, in the park’s newspaper, and at evening programs. Educational signs about bears can be found on picnic tables throughout the park and bear safety videos are posted on this website.

Wildlife managers actively monitor for bear activity and use innovative and proactive techniques to keep bears shy, secretive, and afraid of people. This approach allows bears to remain in their home range, and discourages them from visiting developed areas or approaching people.

Results of these efforts are very encouraging. In some areas the number of bears that have to be trapped and moved away has decreased by ten fold!

What Can You Do To Protect Bears?