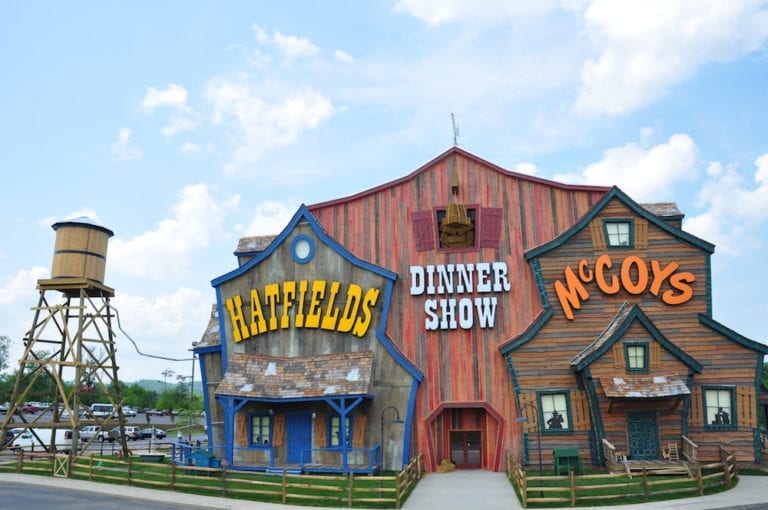 Pigeon Forge is home to some of the best entertainment you will find. Make your experience even more special with a meal at a fabulous dinner theater. Whether you’re in the mood for comedy or live music, you’ll find it here. Here are 5 of the best dinner shows in Pigeon Forge TN.

Prepare yourself for mayhem, mystery, and a meal at one of the funniest shows in Pigeon Forge! The Great Smoky Mountain Murder Mystery Dinner Show offers several different shows that alternate nightly. You’re in charge of solving the crime, while enjoying a delicious dinner.

Visitors to Pigeon Forge can experience a different type of dinner show: Dolly Parton’s Pirates Voyage Dinner & Show. The show features Captain Blackbeard and Calico Jack as they lead the Crimson and Sapphire crews in a battle for lost treasure. The battle takes place on land, on deck, in water, and high above full-sized pirate ships in a 15-foot-deep indoor hideaway lagoon. If you get there early, you can head to Pirates Village and enjoy a pirate or mermaid makeover, as well as pirate-themed beverages and snacks! And don’t forget the four-course pirate feast, which includes the theater’s Creamy Voyager Soup.

The Hit Parade show in Pigeon Forge is a high energy, singing and dancing sensation showcasing the jukebox hits from the ’50s and ’60s plus a moving tribute to our Military.

Hit Parade features some of the top jukebox hits from the early days of rock-n-roll. Rock around the clock with hits from such notable groups and artists as Frankie Valli and the Four Seasons, the Everly Brothers, Neil Diamond, and Elvis Presley. You’ll be moved by our tribute to all branches of the U.S. military.

Soul of Motown brings to life some of the greatest hits of all time. No matter your age, you probably know most if not all of the songs performed on stage. Whether you danced to “Twistin’ the Night Away” when it first hit the charts or your first experience was hearing it in a movie soundtrack such as “Animal House” or “Innerspace” or even “The Green Hornet”, you will be twisting in your seat. And who can’t help but sing along to “My Girl” no matter which of the many artists’ versions you have heard before? Soul of Motown brings generations together like no other live music show.

Join the Duke boys, Daisy, and all the Hazzard Hoedown gang as they go on a wild and crazy adventure to save Uncle Jesse’s farm from falling into Boss Hogg’s greedy hands. Watch as the rival groups head to Pigeon Forge to compete in a Talent Contest. Will the Dukes win the contest and use the grand prize earnings to help pay for Uncle Jesse’s farm? Or will Boss Hogg, Rosco and gang thwart their efforts and win not only the cash prize but take ownership of the farm?

Featuring classic magic, sleight of hand, and grand scale illusions, you will see why the Magic of Terry Evanswood has been thrilling Smoky Mountain audiences for over 20 years!

Become part of the longest running feud in history at the Hatfield and McCoy Dinner Show! From jaw-dropping stunts to hilarious comedy acts, there’s something for everyone. Watch as the diving hillbillies and dogs do all kinds of tricks in the 22-foot deep swimming hole! Be sure to come hungry because this country cooking is all you can eat! Special gluten free, dairy free, vegetarian, and vegan meals are also available upon request. Once you see this hilarious show, you’ll agree that it’s one of the best dinner shows in Pigeon Forge TN!

Attending a dinner show in Pigeon Forge is one of the best ways to spend an evening while on vacation. You’ll be guaranteed a great meal and even better entertainment! Laugh the night away and be amazed by stunts and performances while you eat a delicious dinner.

Voted Best Show in the Smokies year after Year! At Country Tonite you will enjoy music ranging from old country favorites and gospel, to modern hits and patriotic playlists with the best singers, dancers and musicians in the business.

No matter what your age, Country Tonite is THE SHOW you are going to love. No trip to Pigeon Forge is complete without a stop to see the Country Tonite Show!

Country Tonite is located on the Parkway in Pigeon Forge in a 1,500 seat multi-million dollar theater with state-of-the-art sound and lighting and two giant video screens. Our Christmas Show runs November and December.

There is an article for the Comedy Barn on the site. Click here to be directed to it.

When you aren’t out on the town and enjoying a dinner show, we’ll be sure to take great care of you! Start planning your next trip to the Smokies by browsing My Bearfoot Cabins. We look forward to hosting your group.