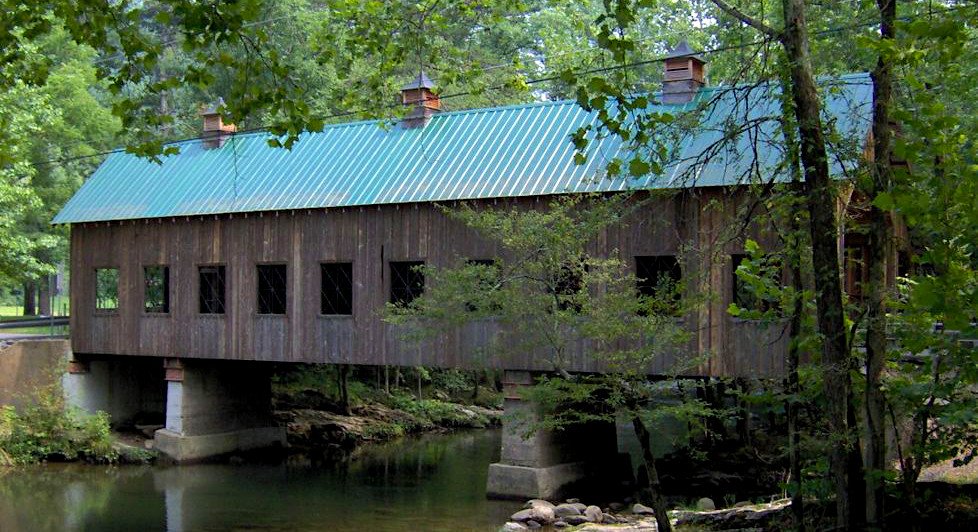 What better way to spend an afternoon than to drive to one of the covered bridges in Sevier County. The first bridge is a perfect spot to learn more about the history of Harrisburg and the surrounding areas. The second covered bridge is a beautiful, drive-by spot to appreciate the scenic views and snap a picture to take home as a memento.

This covered bridge carries historical importance for Sevier County. After the original bridge was destroyed in a flood, the people of Harrisburg came together and provided all the materials and rebuilt the bridge in 1875.

But restoring the bridge wasn’t about historic preservation at the time. The townspeople relied on the covered bridge to travel back and forth to town. The Harrisburg Covered Bridge was a foundational part of Harrisburg during a pivotal time in its history.

The bridge became less essential in 1915 whena bypass was built around Harrisburg. By the 1970s, the bridge had fallen into disrepair and was in danger of being demolished. However, the Daughters of the American Revolution decided to raise money so that the bridge could be restored to its current state for future generations to enjoy.

To get there, follow the Dolly Parton Parkway to Old State Highway 35. Turn left and follow the signs for the bridge. The covered bridge is made of wooden slats and supported by old-style stacked stone supports. The bridge is 83 feet long, 14 feet wide. There is 11.5 feet of clearance.

There are wooden railings on either side leading to the covered portion and multiple plaques where visitors can learn about its history.

If you’re a fan of covered bridges, you’ll be glad you stopped and snapped a picture. This bridge was constructed in 2000 and named for historical figure, Frederick Emert, who arrived in the Smokies in 1790 to build a new life with his family.

Situated over the waters of the Middle Prong of the Little Pigeon River, this historical-style bridge is surrounded by a tranquil setting. The land around the bridge is private, so find a nearby parking lot and walk to the bridge or just slow down and snap a picture or two.

The bridge is made of light wood planks and features a footpath running along one side. From the path, you can enjoy views of the Little Pigeon River and the rocky banks surrounding it. Further up the road there is a historic cemetery that was once the site of a one room log cabin that served as the first Methodist church in the area until it was destroyed by a flood in 1890. The cemetery is also the resting place of Revolutionary War veteran, Frederick Emert.

Let Pat help you plan your stay when you book of the My Bearfoot Cabins.